We must not be afraid to stand up for free markets 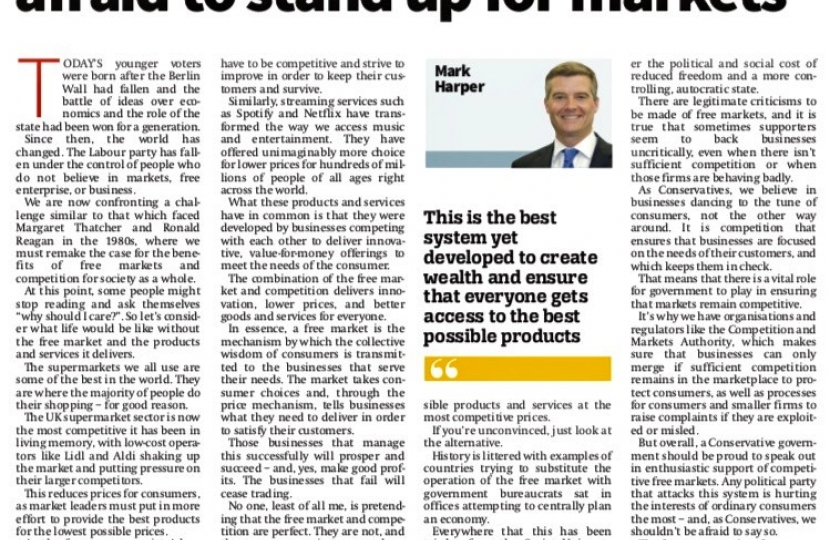 This article was originally published in City A.M.

Today’s younger voters were born after the Berlin Wall had fallen and the battle of ideas had been won for another generation.

The Labour Party has fallen under the control of people who don’t believe in markets, free enterprise or business. Therefore, we face a challenge similar to the one that faced Margaret Thatcher and Ronald Reagan, where we must remake the case for the benefits of free markets and competition for society as a whole.

At this point, people might stop reading and ask themselves ‘why should I care?’ Well, let’s consider what life would be like without the free market and the products and services it delivers.

The supermarkets we all use are some of the best in the world. They are where the majority of people do their shopping – for good reason.

The supermarket sector is now the most competitive it has been in living memory, with the likes of Lidl and Aldi shaking up the sector and putting pressure on their larger competitors. This reduces prices for consumers, making the market leaders put in more effort to providing the best products for the lowest possible prices for consumers. As a result, Aldi and Lidl, who had around 5 per cent of the market a decade ago, now have around 13 per cent between them.

As the famous economist Adam Smith once said, “it is not from the benevolence of the butcher, the brewer, or the baker that we expect our dinner, but from their regard to their own interest.” Translated into modern terms, these businesses have to be competitive in order to keep their customers and survive.

Similarly, streaming services such as Spotify and Netflix have transformed the way we access music and entertainment. They have brought more choice for lower prices for hundreds of millions of people of all ages right across the world.

What these valuable products and services have in common is that they were developed by businesses competing with each other to deliver innovative and value for money services to meet the needs of the consumer.

The combination of the free market and competition delivers innovation, lower prices and better goods and services for businesses and consumers.

In essence, a free market is the mechanism for the collective wisdom of consumers to be transmitted to the businesses that serve their needs. The market takes consumer choices and, through the price mechanism, tells businesses what they need to deliver in order to satisfy their customers.

No one, least of all me, is pretending that the free market and competition are perfect. Of course they aren’t, but they are the best system yet developed by people to create wealth and ensure that everyone gets access to the best possible products and services at the most competitive prices.

History is littered with examples of countries trying to substitute the operation of the free market and competition with bureaucrats sat in offices trying to centrally plan an economy. Everywhere that this has been tried has resulted in less innovation, fewer products and services for ordinary people and a lower standard of living for the bulk of the population.

Sometimes, supporters of free markets and competition back businesses uncritically, even when there isn’t sufficient competition or where businesses behave badly.

As Conservatives, we believe in businesses dancing to the tune of consumers, not the other way around. It is competition that ensures that businesses are focused on meeting the needs of their customers.

So there is a proper role for government to ensure markets are, and remain, competitive.

For example, the reason why we have a Competition and Markets Authority is to make sure that if two businesses want to merge or take each other over, they can only do so if sufficient competition remains in the marketplace to protect consumers. If this isn’t the case, they are not allowed to proceed.

A Conservative Government should be proud to argue for and support competitive free markets.

Any political party that attacks free markets and competition is actually hurting the interests of ordinary consumers the most and, as Conservatives, we shouldn’t be afraid to say so. The prosperity of our country and its people depends on us winning this battle of ideas.