Daily Telegraph: To fix the backstop, Theresa May should push on with the Malthouse Compromise 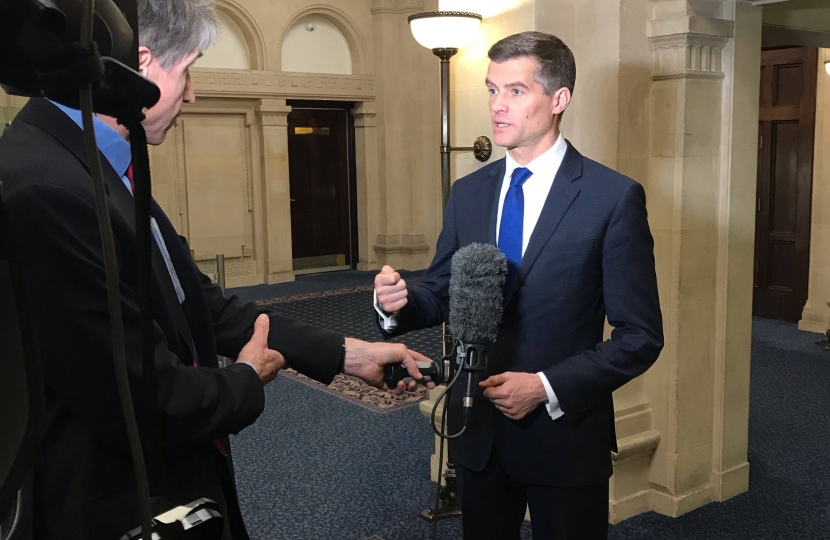 As we arrive at what was meant to be another ‘crunch’ day of voting in the House of Commons, one constant throughout this process is the notion that the Cabinet’s Withdrawal Agreement and Political Declaration is a ‘deal’. With apologies to Noel Edmonds, this is why many think we are fast approaching the point of ‘deal’ or ‘no deal’.

In all this debate, there has not been much, if any, focus on the fact that it isn’t really a deal at all. What do I mean?

There are two things that have been negotiated: a Withdrawal Agreement dealing with money, citizens’ rights as well as a transition period along with a second part, the Political Declaration, which is what our future relationship is going to be – covering trade and our economic relationship as well as our security arrangements. This second part is what most people mean by a ‘deal’.

The problem with the Political Declaration is that the key economic decision, which is how close we remain tied to the EU, has still not been taken.

As the Prime Minister set out in her letter of 11th February to Jeremy Corbyn, the Political Declaration “in some areas, provides for a spectrum of outcomes – MPs cannot be sure precisely what future relationship it would lead to”.

This means that even if the Withdrawal Agreement and Political Declaration are approved by Parliament, no certainty is provided for businesses about the basis on which we are to trade with the EU in the future. All that happens is that we would continue, with the same rules, until the end of next year while we try to settle the future relationship – a process that some have called ‘kicking the can down the road’.

There are a number of reasons why people are concerned by the backstop. The first two reasons have been much discussed and break explicit Manifesto commitments made by us in 2017. Putting economic barriers between Great Britain and Northern Ireland as well as potentially trapping the UK in an indefinite customs union are clearly unacceptable.

The third reason has been less discussed, but is just as important, which is that the backstop – because of the first two points – leaves us in a very weak negotiating position with the rest of the EU. They know that failure to agree a deal by the end of 2020 automatically triggers the backstop (unless we ask for an expensive extension), which means that all the pressure to agree a deal by that deadline will fall on the UK, not the EU.

The fact that we will be just over a year away from the 2022 General Election weakens our country’s negotiating position further.

We risk putting ourselves in a very difficult situation. However, some calm, sensible decision making at this critical point can avoid such a mistake.

There are three options to deal with the backstop. First, the ability for the UK to unilaterally exit from it; second, a short time limit which ensures it would come to an end before the 2022 General Election or third, replace it with something better.

The solution must be something that can be carried in Parliament primarily by the Conservative Party and our DUP allies.

We know that this is possible because on 29th January, the House of Commons voted – by a majority of 16 – to require “the Northern Ireland backstop to be replaced with alternative arrangements to avoid a hard border; supports leaving the European Union with a deal and would therefore support the Withdrawal Agreement subject to this change.”

For a backstop to have the reassurance required by the EU and Ireland, it needs to be capable of being permanent but for the UK, if it were to be permanent, it would need to be acceptable for all parts of our country – both Great Britain and Northern Ireland.

One idea for a backstop that would be acceptable would be a Free Trade Agreement that uses existing practices and sensible cooperation with the EU to avoid a hard border. This would avoid the problems with the proposed backstop but would guarantee the current situation where there is no infrastructure on the border itself.

A detailed plan to achieve this has been set out by my Conservative colleagues in the ‘Malthouse Compromise’. Since this plan is supported by Conservative MPs who took different positions during the referendum campaign, I would urge the Prime Minister to take it forward with enthusiasm.

This opportunity, available now, would allow us to address the backstop and set an acceptable base for our future relationship immediately. This would provide welcome certainty for businesses and allow Parliament to start focusing on some of the other important issues facing our country, not just Brexit.