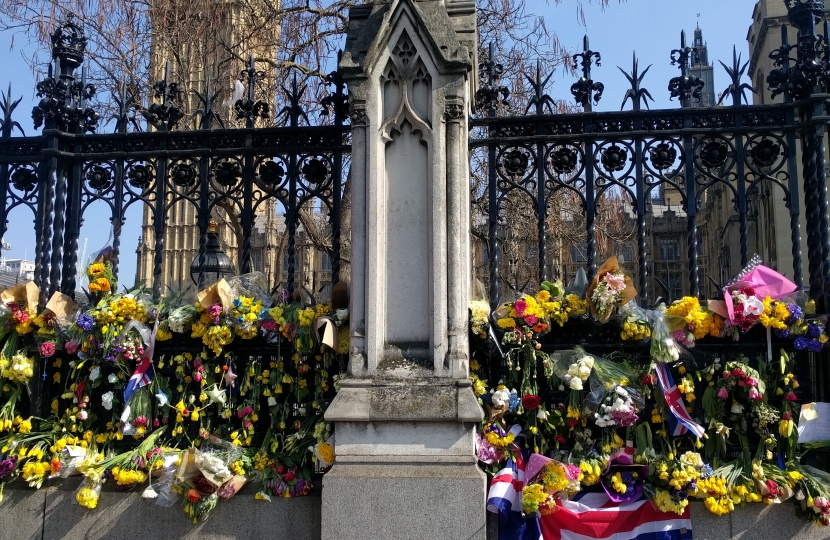 Last week, an act of terrorism was carried out at Westminster, attacking the heart of our democracy in Parliament. Unfortunately, four people lost their lives, including a member of the Metropolitan Police, PC Keith Palmer, and many others were injured.

PC Palmer had devoted his life to the service of our country, and had been a member of the Parliamentary and Diplomatic Protection Command for 15 years. He was a husband and a father, and he died doing the job he loved. He was a real life hero, and his actions will never be forgotten. I would like to send my deepest condolences to his family and friends, and to all those affected by the tragic events of last week.

I would also like to extend my most sincere gratitude to PC Palmer and the men and women in the Metropolitan Police who, day after day, keep us safe in Westminster allowing MPs, Peers and staff to go about their daily business. Last week, the officers of the Metropolitan Police acted with speed and professionalism, demonstrating extraordinary courage and bravery as they risked their lives to defeat an act of terrorism. Thank you.

The values which our democracy represents – free speech, liberty, human rights and the rule of law – are embodied in our Parliament, and the attack on Westminster was an attack on free people everywhere. I am grateful to the show of support from friends and allies around the world who have made it clear they stand with us at this time; the terrorist attacked a place where people from all walks of life and of all nationalities gather to celebrate what it means to be free.

During the attack, Parliamentary business was suspended. Last Thursday, just the day after the attack, both the House of Commons and House of Lords sat as usual, carrying out regular parliamentary business, while the people of London led their lives as normal. This is a testament to the strength and resilience of our country, because we know that democracy, and the values it entails, will always prevail. Our resolve will never waver in the face of terrorism.