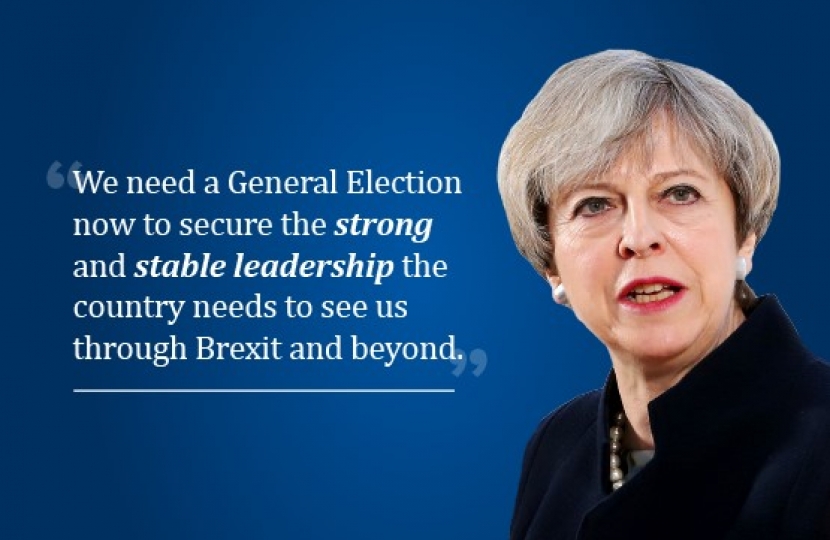 Last week, the Prime Minister called a General Election, to be held on 8th June. There are now fewer than 50 days until polling day, and every vote cast for Theresa May and the Conservatives will count towards strengthening Britain’s hand in our negotiations with the European Union, as we act on the decision the British people made last year.

After the referendum last year, Britain needed certainty, stability and strong leadership, and Theresa May has led a Government that delivered on that. Article 50 has been triggered, and Britain is now leaving the European Union; there can be no turning back.

At this moment of huge national significance, we need unity in Westminster, but instead there is division. Labour has threatened to vote against the deal we reach with the European Union, the Liberal Democrats have said they want to grind the business of government to a standstill, and the Scottish National Party say they will vote against the legislation that formally repeals Britain's membership of the European Union.

A General Election will strengthen the Prime Minister’s negotiating hand in our negotiations with the EU, and is the only way to ensure we have strong leadership, certainty and stability for a full five years, not just up to the point at which we leave the European Union, but beyond it too.

Theresa May has the right plan for a stronger Britain, and the proven leadership to deliver the right deal, establishing Britain as the strongest country in Europe, with a deep and special relationship with our European neighbours. We will build a stronger economy that rewards people who work hard and creates secure, well paid jobs, providing real opportunity for all and giving everyone a chance to get on in life.

It has been an honour to represent the Forest of Dean for the last twelve years, and I will again be standing for re-selection and re-election, and I hope that the people of the Forest of Dean will allow me to once again serve them in Parliament. The choice in this election is strong and stable leadership in the national interest with Theresa May and the Conservatives – or weak and unstable coalition government, led by Jeremy Corbyn.