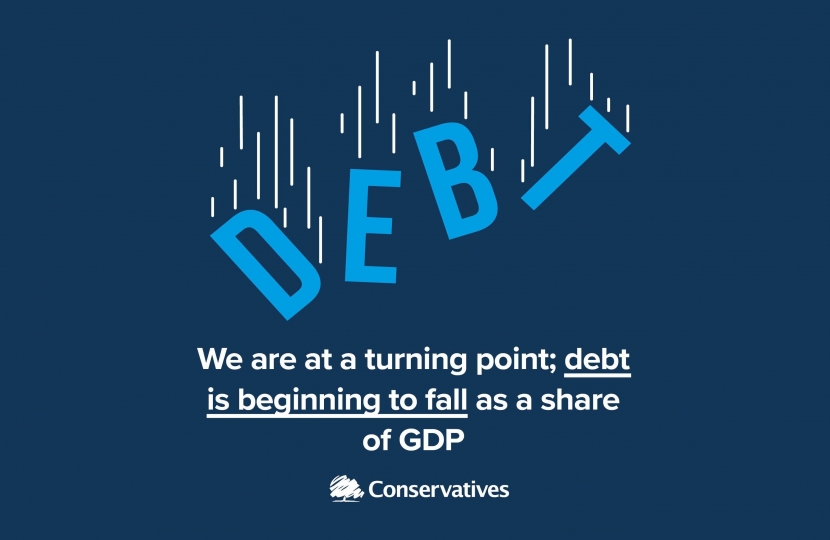 Last week the Chancellor of the Exchequer delivered the Spring Statement and he had some excellent news: thanks to the hard work of the British people we are forecast to see the first sustained fall in debt, relative to the size of the economy, for over 17 years.

The UK has come a long way over the last eight years, with our economy growing strongly, unemployment at record lows, the deficit down by three quarters, and more investment in public services like the NHS.

The Chancellor outlined the Government’s economic priorities for the UK - getting control of the public finances whilst investing in our public services, building our economy to create better, higher-paying jobs, and continuing to support families with the cost of living.

The Government is taking a balanced approach as we build an economy that works for everyone. Since autumn 2016 we have invested over £60 billion in public services and in building infrastructure for the future, while continuing to cut tax for millions of working families and seeing debt, as a proportion of the economy, start its first sustained fall in a generation – a turning point in our recovery from Labour’s mess.

There is a lot of good news. The OBR increased their estimate for growth in 2017 from 1.5% to 1.7%. Manufacturing has grown for the longest consecutive period in 50 years and there are over a million more businesses across the UK than in 2010.

Rightly, none of these figures matter unless people are becoming better off. Under this Government, disposable income per person is now 4.4% higher in real terms than it was in 2010. It is the Conservative Party that introduced the new National Living Wage – delivering the fastest pay rise for lower earners in 20 years. We’ve also raised the personal allowance so that, this April, 31 million people will see their income tax bill over £1,000 lower than in 2010 – keeping taxes low for ordinary families.

To quote the Chancellor: “There is light at the end of the tunnel”.