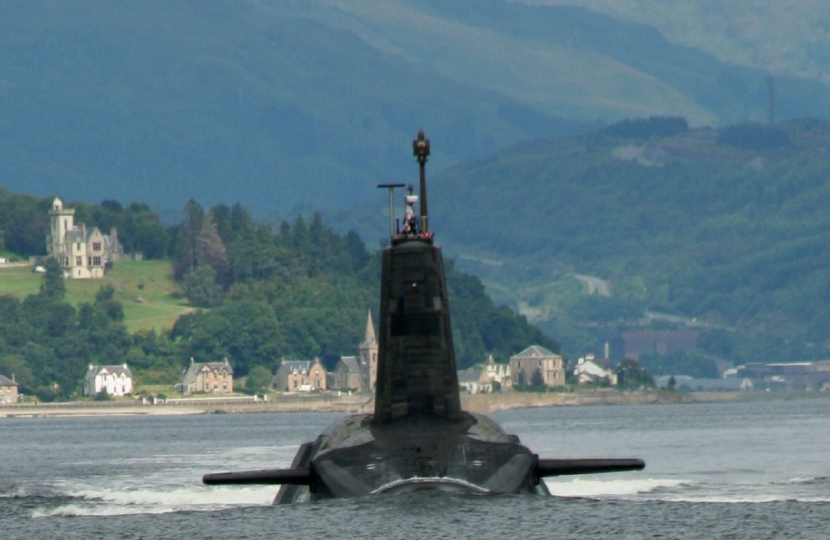 Just before Easter, Defence Secretary Michael Fallon set out the case for the retention of our independent nuclear deterrent. The Government believes that a strong and capable nuclear defence system is vital to guaranteeing our security, providing us with the necessary insurance in an ever more uncertain world.

We live in an increasingly dangerous world, and the UK is facing a growing number of diverse and complex threats. As a result, the first priority of this Government is the protection of the UK and its vital interests. North Korea has recently carried out nuclear missile tests while Russia continues to increase its nuclear investment, demonstrating how real these risks are in today’s world.

The best way to protect ourselves from these threats is to have our own, independent nuclear capability. The nuclear deterrent is designed to deter potential adversaries from launching a nuclear attack on us or our allies. It is simple logic that if an adversary has more to lose than gain by attacking us, they will be deterred from doing so. A nuclear deterrent is the most effective way to deal with the most extreme threats, guaranteeing our national security and way of life.

This does not, however, mean that we are not committed to a goal of a world without nuclear weapons in the long term. We have reduced our nuclear forces by over half from their Cold War peak in the late 1970s, and will continue to reduce the overall stockpile to no more than 180 warheads by the mid-2020s. It would, however, be irresponsible to disarm unilaterally while the capability to threaten us with nuclear weapons remains – we possess only around 1% of the total global stockpile of nuclear weapons.

This investment in our national security has been estimated at around £31 billion. Alongside a £10 billion contingency, this money will go towards the four new Successor class nuclear-armed submarines needed to retain our deterrent. People understandably want to be reassured that this money will be well spent, and it works out as 20 pence in every £100 of Government spend over 35 years. In-service costs will be similar to now, around 6% of the Defence Budget, for a system that will provide a capability through to the 2050s, ensuring our national security and protecting the British public.