Protecting the economy means living within our means 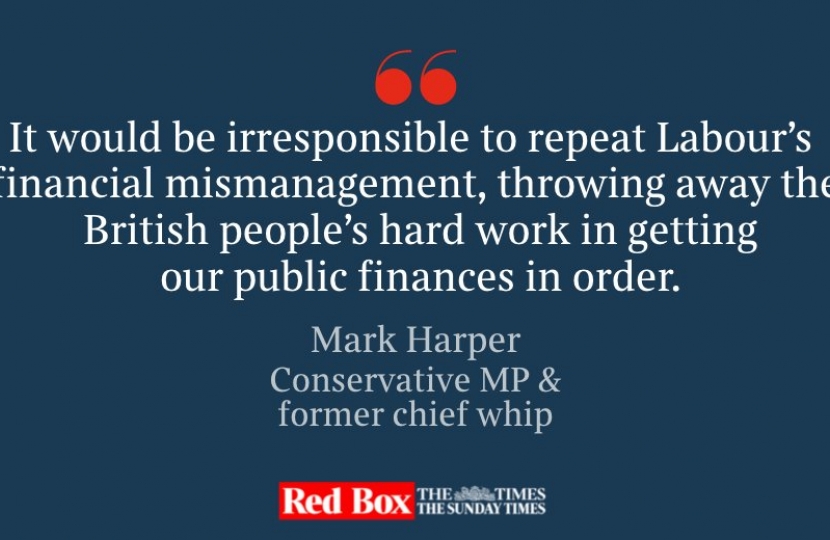 Living within our means is necessary to grow the economy, create jobs and protect our public services. Governments that fail to grip their deficits find that international confidence falls, their credit rating slips, and the cost of borrowing goes up.

In 2010, we inherited from Labour a deficit of 10 percent of GDP - £150 billion in cash terms. We had to make a number of difficult decisions, but as a consequence we have had some of the strongest growth figures in the G7, and the deficit as a proportion of the economy has fallen by three quarters.

Our record on jobs has also been very positive. The unemployment rate now stands at just 4.6%, the lowest level since 1975. That means three million more people are now in work, with almost half a million more young people enjoying the opportunities and freedom a job brings.

We could – and should – have made more of these achievements during the General Election campaign. It wouldn’t be right to change tack now. It would be irresponsible to repeat Labour’s financial mismanagement, throwing away the British people’s hard work in getting our public finances in order.

We must not shirk our responsibility in making the tough choices needed for a strong economy. One such decision has been public sector pay restraint. Some think that this policy has run its course, but it is important to look at both public and private sector wages.

To add to this, many public sector workers – including in the NHS and teaching – receive a salary rise each year, on top of the one percent national increase, as they move up the pay scales. This has meant a rise of more than 3% for more than half of NHS staff, an average rise of 3.3% for teachers, and a 2.4% increase for military service personnel.

We have to take this into account when deciding our public sector pay policy, balancing the need for fairness for public sector workers, with the cost to the wider taxpayer. Economic growth will increase tax revenues, allowing some growth in public spending, including on pay. However, if you want to spend more than this, you either have to borrow more, or raise taxes. Borrowing more simply passes the bill onto future generations, whilst tax levels are already approaching the limits of public acceptance.

By fixing the roof when the sun is shining, we will be better able to weather the storm next time the economy takes a downturn. This means we will pass on a lower debt burden to our children, whilst continuing to protect our public services.

This is the transcript of an article I wrote for The Times on 11/07/2017, which you can read at: https://www.thetimes.co.uk/edition/news/red-box-protecting-the-economy-…