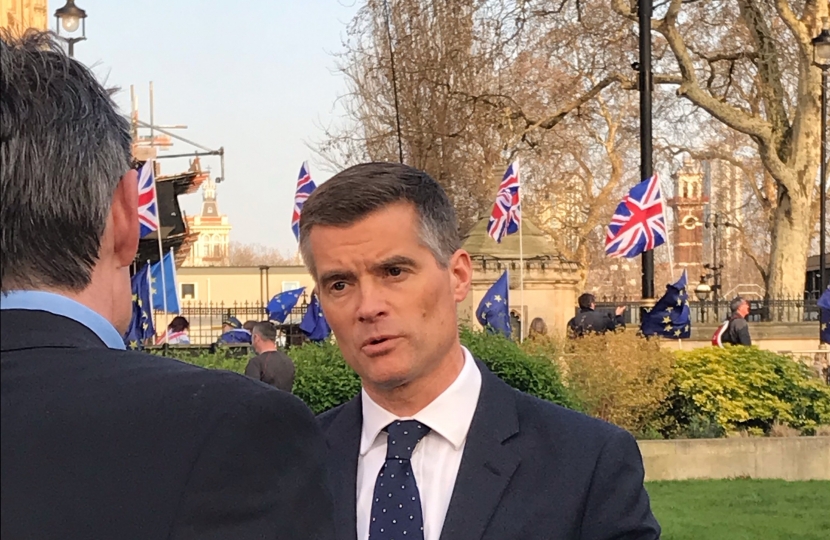 While I backed Remain during the referendum campaign, I am first and foremost a democrat. It was up to the electorate to judge the merits of the different arguments and the country voted to leave the EU.

I voted to trigger Article 50, and stood on a Conservative Manifesto in 2017 to leave the Single Market and Customs Union.

Regrettably, Theresa May's Withdrawal Agreement put to the House of Commons on 15 January 2019 included a backstop which, if triggered, would have trapped the whole of the UK in a customs union with the EU, and it would not have been possible for the UK to leave this customs union without the permission of the European Union.

I voted against the proposals twice for this reason because I believed it would have left us in a weak negotiating position for our future relationship.

The votes in Parliament over the course of March 2019 strongly suggested that if Theresa May’s Withdrawal Agreement was not approved, then there was a very significant risk that Brexit would not be delivered at all.

I was not prepared to see our democracy damaged in this way, so I voted for the Withdrawal Agreement at the third occasion on 29 March in the hope that we could leave the EU on time.

I also voted to keep No Deal on the table and leave the EU, deal or no deal, on 29 March and 12 April. To do otherwise would have damaged our negotiating position. And I voted against any extension to Article 50, which would prolong uncertainty for people and businesses across the country.

Unfortunately, Parliament did not vote the same way.

My preference is to leave the EU with a deal. However, if I am ever faced with the choice of leaving without a deal or not leaving at all, I will choose to leave.

On 4 September, I voted against Labour’s ‘Surrender’ Act which sought to extend Article 50 (costing our country £250 million a week) into next year and potentially indefinitely – increasing damaging levels of uncertainty for business and jobs.

Labour’s Brexit policy is just more pointless delay.  Meanwhile, the Liberal “Democrats” confirmed at their Party Conference that they want to overrule the referendum result and revoke Article 50, cancelling Brexit altogether, despite having asked for an EU In-Out Referendum as far back as 2008.

Following the EU Summit in October, Boris Johnson returned to the UK with a new Brexit deal.

The deal Boris Johnson negotiated is an improvement on Theresa May’s as it provides the UK with the basis of a new relationship with the EU based on free trade and cooperation, allowing us to leave the EU’s Customs Union so we can pursue our own independent trade policy and build our economy in the way that suits us instead of Brussels.

Northern Ireland will remain in the UK’s customs territory, having the benefits of free trade deals while having no hard border with the Republic of Ireland.

What’s more, this new deal abolishes the ‘backstop’. Now, the people of Northern Ireland will be in charge of their laws as the Northern Ireland Assembly will have the right to vote to end this special arrangement.

Unfortunately, Parliament blocked the passage of this deal and Corbyn’s Labour Party refused the PM’s offer to have more time to consider it – forcing a further three-month delay.

The General Election result was clear. The country has voted in favour of the positive, One Nation vision of the Prime Minister Boris Johnson and rejected the alternative vision of the Labour Party.