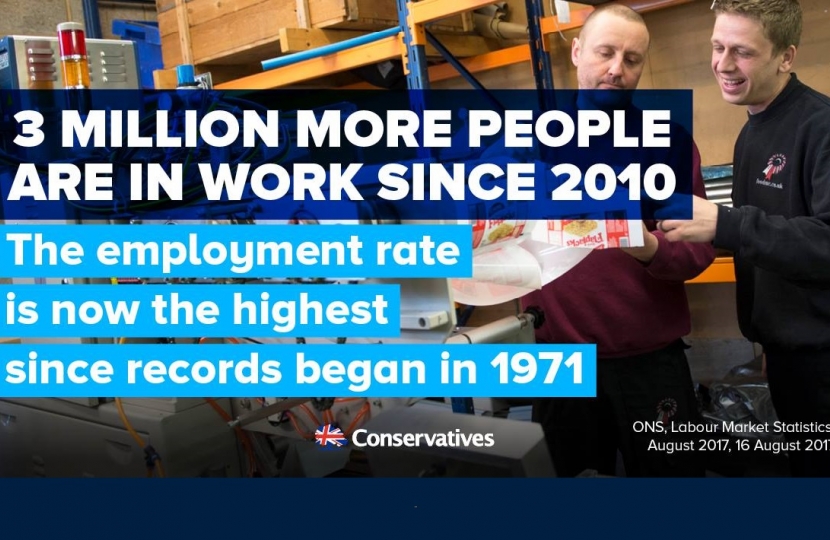 Recent figures released by the independent Office for National Statistics (ONS) show that employment in the UK has reached its highest rate on record, at 75.1%, with over 32 million people now in work, up 338,000 in the past year and over 3 million since 2010.

The unemployment rate has fallen to 4.4%, its lowest rate since 1972– less than half the average of countries in the Eurozone – with 157,000 fewer people unemployed compared to last year.

The growth in employment over the last year has been overwhelmingly in full-time and permanent roles. And while zero hours contracts always constituted a small segment of the work force, that number has declined too.

There is also continued good news in the Forest of Dean. Unemployment remains at its lowest levels in over a decade, having more than halved since 2010 – with over 1,000 fewer Foresters claiming out of work benefits than at the peak of the impact of the financial crisis.

Furthermore, our welfare reforms are supporting people off benefits and into work. The roll-out of Universal Credit is helping people claiming benefits move into work without the financial cliff-edge that could exist under the old system, where people could actually lose out by getting a job, or by working more than a certain number of hours. Under Universal Credit, it always pays to work, and it will always pay to work more hours – claimants will see the benefit for this.

These promising figures show that this Government’s economic strategy is working and that Conservatives are delivering economic policies that allow businesses to thrive and give people the opportunity to get into work.

The British economy is going through a period of significant change, but the employment figures show that the British economy is fundamentally strong and prepared for the challenges that lie ahead. The Government will continue to build on this success story so that everybody can benefit from the opportunities that are being created.