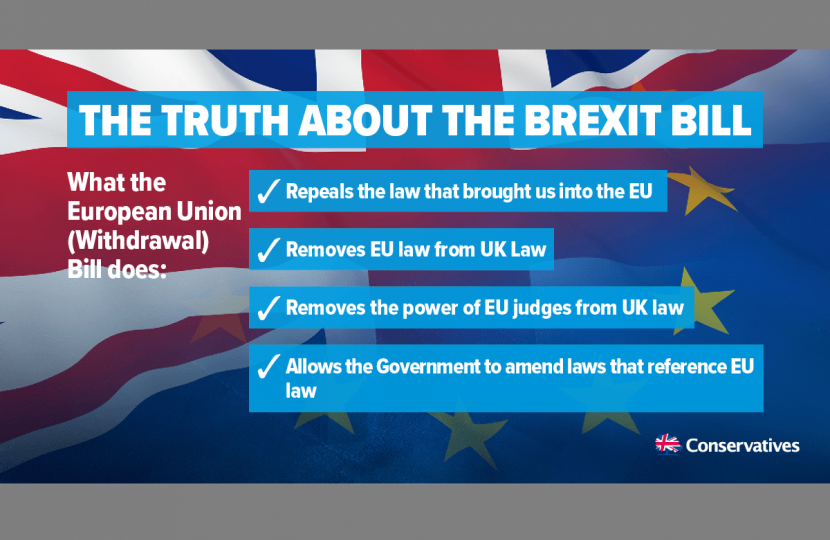 This week, the House of Commons voted on Second Reading of the European Union (Withdrawal) Bill – the Bill that delivers the first step of our promise to respect the result of last year’s EU referendum, and end the authority of EU laws in the UK.

The Bill aims to ensure that we have a smooth exit from the EU. The Bill repeals the European Communities Act, returning supremacy of UK law to the UK Parliament. However, to ensure a smooth exit, it also ensures that all existing law will continue to apply from the day we leave the EU, but importantly places it on the UK statute book, so that the UK Parliament can change it in future if it sees fit. This provides the maximum possible certainty to individuals and businesses about their legal rights and obligations as we leave the EU, and provides the basis for a smooth and orderly exit. It is in no one’s interests for there to be a cliff edge when we leave the EU.

Finally, it gives Ministers powers to make technical changes to laws which no longer operate properly (for example, change references to the European Courts to the UK Supreme Court, and from the European Commission to UK institutions).

The Bill does not deliver any policy changes. The Government will introduce a number of separate Bills over the next two years, including a Customs Bill and an Immigration Bill, to outline specific proposals for our post-Brexit policies. These Bills will be considered separately from the Withdrawal Bill, and go through the usual Parliamentary process.

The Bill rightly applies equally across all parts of the UK so that regardless of where people live or businesses operate, the law is clear. The Bill will temporarily preserve the consistency provided by EU rules in operation for the UK so that we can work with the devolved administrations to ensure that once we have left the EU, policy making sits in the right place and closer to the people than ever before.

Whatever people’s views were during the referendum, it is in nobody’s interest for there to be gaps in the law when we depart the European Union. In the absence of alternatives, a vote against this Bill is a vote against an orderly withdrawal and a vote for a chaotic departure from the EU. I will be supporting this Bill – to deliver a smooth Brexit for the UK.