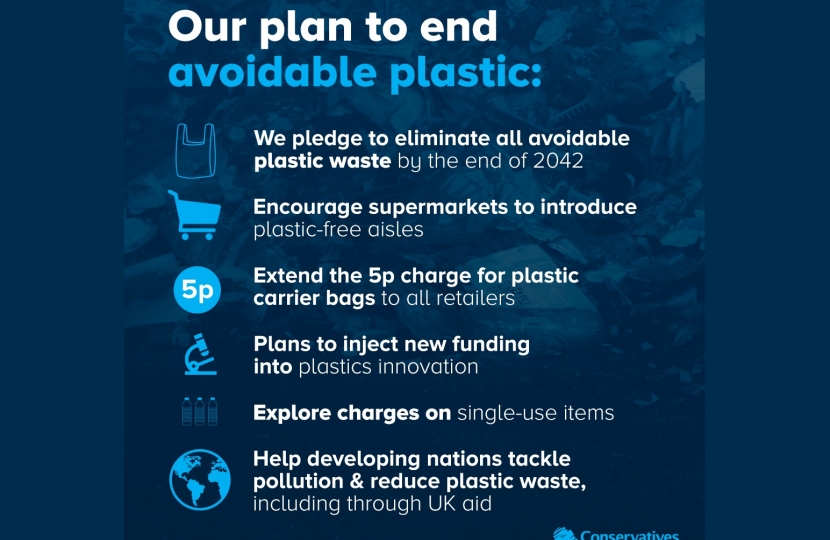 Last week the Prime Minister launched the 25 Year Environment Plan, highlighting the steps the Government will be taking to leave our environment in a better state than we found it for the next generation, delivering a cleaner, greener Britain.

The first pledge is to eliminate all avoidable plastic waste by the end of 2042. This will involve encouraging supermarkets to reduce the amount of plastic packaging used, extend the 5p charge for plastic carrier bags to all retailers, and issue a consultation on taxing the most environmentally damaging plastics. The Government will also investigate a new charge or tax on single-use plastic items, such as takeaway containers, to help encourage industry to take more responsibility for the environmental impact of their products.

As well as curbing our plastic use, this Government wants to be more creative about the problem. To this end, it will inject new funding into plastics innovation through a bid into the government’s £7 billion research and development pot.

Plastic is not the only focus of the Environment Plan. Here in the Forest, a pilot programme is being introduced where a family of four beavers will be released at Lydbrook - to help reduce the risk of flooding and enhance biodiversity. The beaver is a part of our wildlife heritage and I am pleased that they will be introduced (perhaps even re-introduced, albeit after a gap of over 400 years!) to the Forest of Dean.

Finally the UK will seek to use our position as a world leader in protecting our planet to drive change internationally. When we host the Commonwealth Heads of Government Meeting in April we will put the sustainable development of our oceans on the agenda. We will help developing nations to reduce plastic waste, increase our own marine protected areas, and establish new Blue Belt protections in our Overseas Territories.

Environmentalism is central to conservatism and this Government believes that it is our duty to leave our planet in a better state than we found it for the next generation. The action that we are taking will provide Britain with cleaner air, greener spaces, and stronger protections for animal welfare.