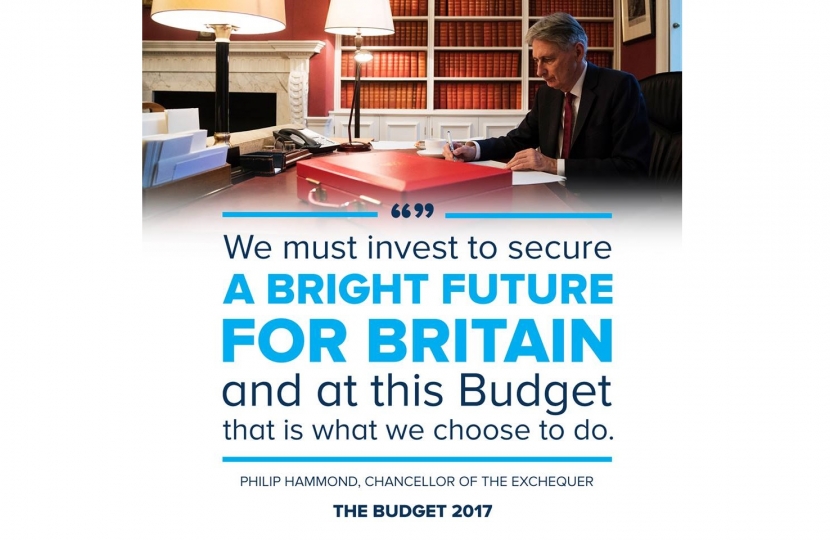 Last week, the Chancellor of the Exchequer, Philip Hammond, put forward his Budget proposals to the House of Commons.

The Budget contained significant support for families, increasing the National Living Wage by above inflation, once again cutting income tax by raising the personal allowance, and freezing fuel duty for the 8th year.

The Chancellor also announced the expansion of the National Productivity investment fund to a total of £30 billion, supporting investment in emerging technologies like Artificial Intelligence and driverless cars, and backing business with a £2.3 billion package on business rates.

The further changes to the Personal Allowance represent the latest in a significant change in personal taxation. The average taxpayer now pays over £1,000 per year less in Income Tax compared to 2010, thanks to the tax-free Personal Allowance increasing from £6,475 in 2010/11 to £11,850 from next April.

The Chancellor put in place more support to help build new homes, and to help young people get on the housing ladder. The Government are aiming to deliver 300,000 homes per year to help deal with the housing shortage in some parts of the country. He also announced that he is abolishing stamp duty for over 80 per cent of first time buyers and investing more to take government support for housing up to £44 billion.

The fuel duty rise scheduled for April has been cancelled – keeping it frozen for the eighth consecutive year meaning the average car driver is £850 better off since 2010.

He also announced a £1.5 billion package to address some of the issues encountered during the roll-out of Universal Credit- the new benefit system. The 7 day waiting period will be removed, so that claimants only have to wait 5 weeks for their first claim, while also increasing the amount of advances available, so that – if needed – a household can receive a full month’s claim within 5 days. Any new Universal Credit claimant in receipt of Housing Benefit, will continue to receive it for two weeks. This should help resolve some of the issues encountered in the early stages of the roll-out, and ensure that the remainder of the roll-out is successful.

This Budget lays the foundations for a Britain fit for the future – investing for the long-term while supporting families and businesses under pressure now, setting a path to a more prosperous Britain.