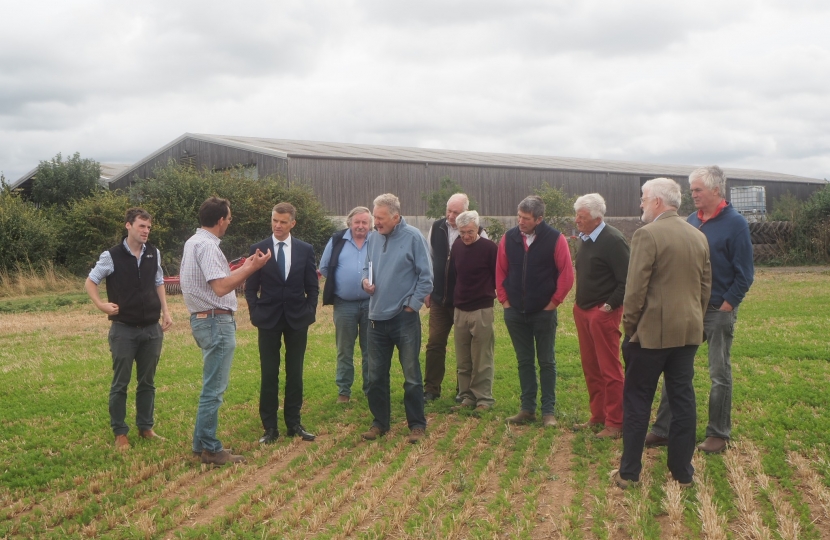 During the Election campaign, I met with local NFU members and set out how a majority Conservative Government will give certainty to farmers by guaranteeing the current annual budget to farmers in every year of the next Parliament, and initiating a 7-year transition period to move from the current payment system under the Common Agricultural Policy (CAP) to a new, fairer system.

I am pleased to report back to my constituents that the Government is confirming both of these Manifesto promises.

This week, the Government is introducing the Direct Payments to Farmers (Legislative Continuity) Bill to ensure that farmers continue to receive direct payment support for the 2020 scheme year.

The Bill also includes a provision to allow us to implement a previous Government funding announcement to provide additional funding of £56.6m until 2022 for UK farms.

After 2020, the Treasury have committed to match the current overall budget available to farmers in every year of this Parliament.

The Government will bring forward an Agriculture Bill this month, as announced in the Queen’s Speech in December, to provide the future framework for future farming policy in England from 2021.

The new, fairer funding system will replace the restrictive rules of the EU’s Common Agricultural Policy (CAP), freeing farmers to seize the opportunities offered by Brexit. It will introduce ambitious new land management schemes, based on the principle of “public money for public goods”, which will allow us to reward farmers and land managers who protect our environment, improve animal welfare and produce high quality food in a more sustainable way. Farmers and land managers will be supported over a 7-year agricultural transition period, giving them time to plan and adapt to the new approach.

This comes on top of the Chancellor’s recent funding pledge of £3 billion from the Treasury to allow rural businesses and communities to plan for the future and care for their crops and livestock with confidence after Brexit.

Farming is the backbone of our rural economy and I will continue to support our local NFU teams both in Westminster and the Forest of Dean as the UK prepares to leave the EU’s agricultural regulations and subsidy scheme.